On Foot to the End of the World 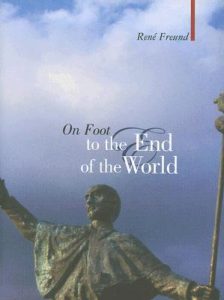 Only when you reach the edge of the continent having walked along the way of St James, which pilgrims of former times thought to be the end of the world, only then do you realize that the old pilgrims saying is true: The Journey does not end in Santiago. The journey begins in Santiago.

René Freund introduces the reader to the stunning visual landscapes he encounters along the way; the people he meets and the hardships he suffers. He lays bare his own physical and psychological suffering, but ultimately receives the reward of arrival that his hardships deserve.

„All those who have walked to Santiago will find, in Freund’s book, a perfect evocation of The Way; all those who have not will surely find themselves yearning to experience it at first hand.“
— The Independent

„René Freund’s account of his 1,138km walk to Santiago de Compostela conveys the excitement and anxieties of the pilgrim, coloured with tales of hospitality that echo Patrick Leigh Fermor’s walk to Constantinople between the wars. There is something of Chaucer, too, in his evocation of that singular bond among foot travellers. Despite the physical and psychological challenges, or perhaps because of them, he asserts that “Walking is the form of travel most suited in pace to perception. You measure the world step by step.”
— The Times Literary Supplement